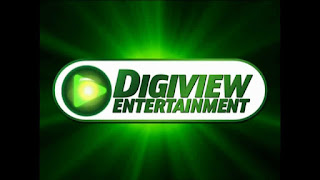 This next highlight comes from one of the last PD companies to highly promote the public domain Looney Tunes.  And a very cheap company too.

Digiview was formed in the early 2000's.  Their primary goal was to release many titles for a cheap price.  This included family entertainment, classic films, and classic TV shows, and the public domain cartoons were no exception.  For about a buck per disc, you get at least one hour of entertainment (or so they say) on their discs.

Our primary goal is to cover the cartoon section.  Their first line of cartoons were the Cartoon Craze. 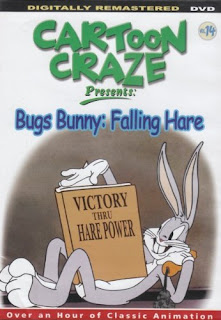 These titles were mix and matches of many public domain cartoons.  Although the main cartoon may be a Bugs Bunny one, that does not mean the whole disc is nothing but Bugs Bunny cartoons.  No indeed, it would be another PD cartoon.  So it wouldn't be a full hour of Bugs Bunny, Daffy Duck, or whoever is represented on the cover. 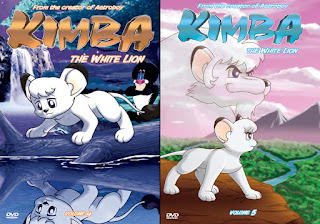 An unusual line of DVDs they did were for the supposed public domain episodes of Kimba the White Lion.  These versions are the 1993 dubs as opposed to the original dubs that aired in the 60's and official releases once again proved superior.
Digiview took a step further by somehow sub-licensing animation cheap......REAL cheap.  Remember, it's one buck per disc.  So....the cartoons aren't even B's, but maybe C's.  They were cartoons made in Australia or kiddie anime shows and movies.  Some of these titles includes Dot and Kangaroo, animated adaptations of Treasure Island or Westward Ho, and Thumbelina.  Even Monster Rancher was part of the deal, which was on Fox Kids, so it really was a matter of what was fast and cheap.  The Thumbelina anime was the US version which means that the entire series was cut into an 80 minute movie.  Very bad..... 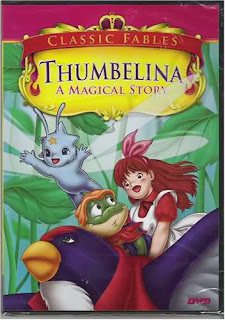 Now I wouldn't scream ripoffs of Disney with these titles however, because these were not original productions.  To anime fans these are not what we wanted.  These bad dubs were bad back then as anime did not have the treatment it has today with companies like Funnimation.  Still, there's more bang for that buck. 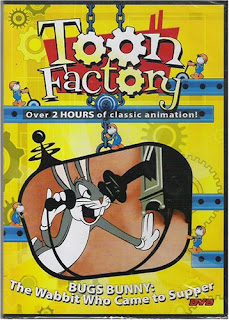 In 2006, Digiview released Toon Factory.  These DVD's were like the Cartoon Craze, but with much more cartoons.  These are your typical suspects.  However, by this point WB put out their 4th Golden Collection DVD's which were superior, and since these DVD's were much cheaper, that's when WB put the stop to their cartoons being widely available even if they are public domain (a few more companies did slide, but were not widely displayed like Digiview's DVDs).  The quality of these DVD's varied.  Most were fair.  Many WB cartoons were at the wrong speed.  Some had different opening titles for no apparent reason.  Some of the Popeyes had different sound effects added.  Digiview even did one big tin boxed set of all of these Toon Factory cartoons. 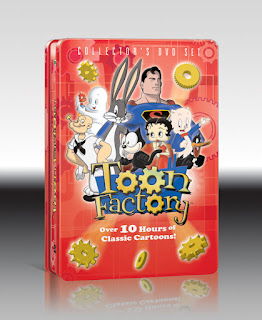 As you see, the artwork on these covers are not bad looking as they are recreated to the exact degree of what they would have looked like in the cartoons themselves.  The series continued on in 2007.  With their final volumes....they are........ 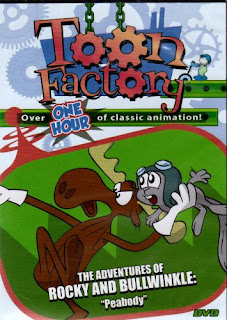 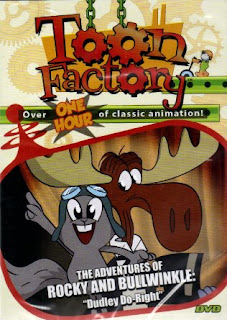 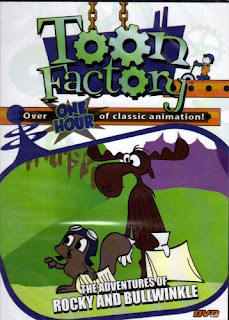 ROCKY AND BULLWINKLE.  As stated in a previous post, it's been debated whether or not those 98 or so syndicated Bullwinkle Shows are in the public domain or not.  Nevertheless, these were select episodes from those prints.  More specifically was the Buried Treasure storyline from season 2.  Picture quality varies.  Many are fair, but with each print comes different issues such as cutting down the intros for time (when aired on TV).  The discs themselves are just the Rocky and Bullwinkle segments (well, at least one of them for sure).  A Mr. Know it All may sneak in.  And the sound was mmmm...not that good.  Buzzing and standard mono quality could be heard, and The Bullwinkle Show intros and (if they show up) outros have rumblings heard (which may have been a dupe when ready for syndication by P.A.T./General Mills).  All is not lost though, the official DVD's never even as bonus features released those intros and outros nor the original theme to Rocky and Bullwinkle, but the official releases still proved better in quality control.

Digiview ended up folding soon after.  They couldn't keep up with what the main owners were doing with their library and not to mention the downhill spiral of DVD's thanks to streaming, but boy did they release a lot, and by God they tried....they really really did.  They just didn't have someone who knew these things involved.

UPDATE:  Anime News Newtork's Justin Sevakis just talked about Digiview's handling with anime.  This was a specific studio called Enoki Films.  Here's what he had to say:

"Digiview Entertainment had a deal with Enoki Films to release some of their old dubbed kids-friendly titles such as Thumbelina: A Magical Storyand Huck and Tom's Mississippi Adventures. Digiview also released several Korean-produced features from the 80s that were made with cels clearly bootlegged from mechaanime TV series that were in production at the time and partially outsourced to Korea. Given fake American credits and dubbed horribly, these films (given laughably generic names like Space Thunder Kids and Defenders of Universe) were pretty much unwatchable. (I had copies of all of them before selling them on eBay last year.) These films were being sold by a Hong Kong-based company called IFD Films and Arts (infamous among bad movie aficionados for producing incoherent kung fu and ninja movies by schlockmeister Godfrey Ho). " 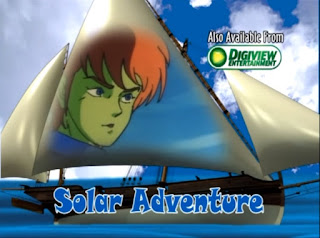 Ohhhhh yeah.  I know about these rip offs.  One of my good friends, Chase Pritchard and his animation buddies streamed one of these one day.  Believe me when I say, YOU DON'T WANNA WATCH THESE.  The other anime shows like Thumbelina and The Wonderful Galaxy of Oz, sure they may be good, but remember, this is not Funnimation.  These are edited down to a movie (probably in the 90's).  You get a taste at how bad anime adaptations (or fake anime stuff like Solar Adventures) really were in the 80's.

Justin
Hi! I'm Justin, and I am a major fan of classic animation (Looney Tunes, Tom and Jerry, Yogi Bear, Underdog, Popeye, and others) as well as anime (Sailor Moon, DBZ, Pokemon, Madoka Magica, Kill la Kill, and others). Since I love the idea of Boomerang so much and talk about it a lot, I decided to start up a blog. This is in relation to what my friend Josh is doing with his blog about Toonami.